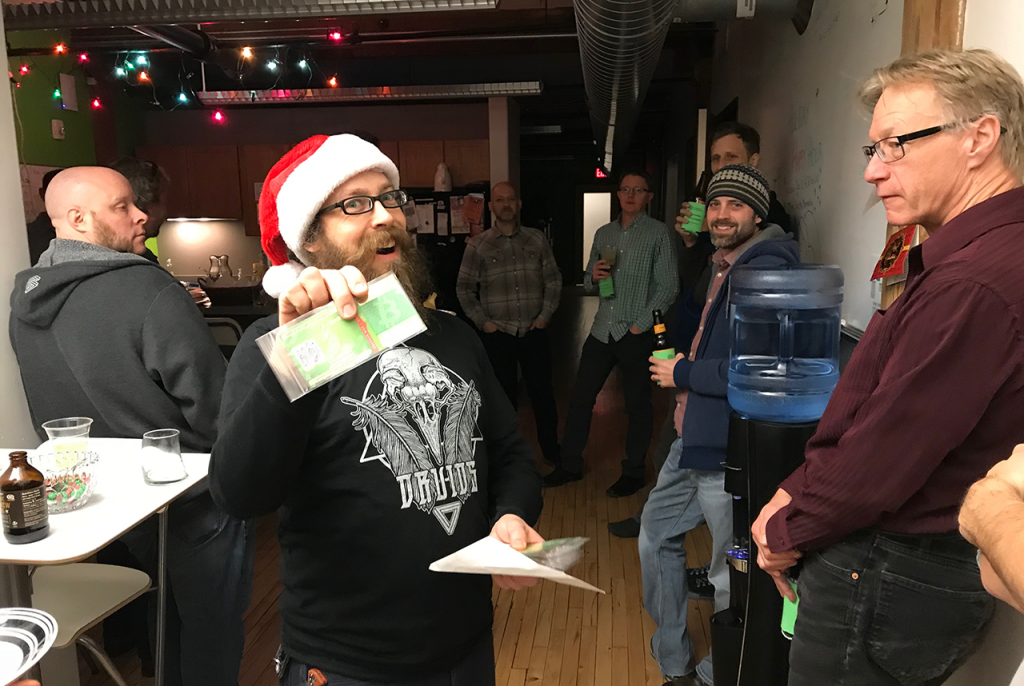 In mid-November bitcoin began a wild climb, rising nearly 2000% since the beginning of 2017. With the holidays coming up, company leadership thought it would be fun to gift staff with a token amount of bitcoin. A stroke of luck meant that our initial buy of $50 per person increased 70% in a matter of days.

So how do you gift bitcoin anyway?

We first considered setting up an account using the company credit card to purchase bitcoin but fees and uncertainty about who would need to “own” the account made that impractical.

So we turned to our office crypto-zealot, Don Smith, who agreed to purchase $1,650 in bitcoin using his account. Unsure as to how that would play out under accounting rules we consulted our CFO who said to expense it as a reimbursement for any other purchase on behalf of the company.

Now that we had the bitcoin we needed to figure out how one goes about distributing digital currency. The popular exchange platform Coinbase doesn’t support transactions with multiple recipients, so we needed to send the funds to an Electrum wallet where Don could divvy up and send the bitcoin to multiple public keys. We needed to place the keys in the possession of individual staff but asking every employee to set up a digital wallet seemed not only burdensome but also diminished the spirit of giving. Instead, we generated paper wallets at bitcoinpaperwallet.com where we were able to choose an attractive holiday-themed wallet design to print the public/private keys.

The next step was to build a list of the public keys to which Don would send the bitcoin allotments. We were a bit anxious while we waited for confirmation that we hadn’t lost one-and-a-half grand to the digital ether, but alas! ten minutes and a $65 fee later we had successfully transferred the bitcoin to 33 public keys.

A perhaps-absurd amount of time was then dedicated to printing, cutting, folding and stickering the wallets to make a presentable and somewhat secure packet for the precious keys. Paper wallets have no actual value other than as a reference for the private and public keys, but that information should be carefully guarded.

Gifting bitcoin means you run the risk of handing over a lump of coal instead of the shiny object you’d planned on. Lucky for us, the price held until the day of the office holiday happy hour when Crypto Claus passed out paper wallets to all the good boys and girls at Earthling.

Does this mean we’re all in for crypto? Not quite, we admire the elegance of the blockchain and appreciate the hacker roots of cryptocurrency. But we also respect the skeptics and as a practical matter need to remain firmly in the fiat world (of course you won’t hear any complaints if that token gift turns into a nice family vacation some time down the line).