When you hear the word “Cloud” in our industry, it is most often stuck before “Computing” or “-Based.” But that isn’t the case in my little corner of the Earthling Interactive office.

To explain, let’s go way back to 2011…
On March 14, 2011, the Guardian posted an article about a project by David McCandless in which he created a Consensus Word Cloud of the Top 100 Books Everyone Should Read. A Word Cloud is a way to visualize data, taking key words from some text, like a speech or report, and showing them bunched together in a “cloud”, with the importance of each word emphasized by size or font color. In Mr. McCandless’s case, his word cloud was created by looking at 15 different top 100 lists and pulling out the 100 movies that appeared the most often. The bigger the name in the cloud, the more often it occurred in the lists. For example, To Kill a Mockingbird is the largest title in the word cloud as it appeared in 12 of the 15 lists.

From a data visualization perspective, there are a lot of pros and cons to a word cloud, and I personally think the cons outweigh the pros. If you just wanted to know the 10 books that occurred most frequently on lists, it is really hard to tell the difference between sizes for all but the one in the first place (eg. is Crime and Punishment smaller than Hitchhiker’s Guide to the Galaxy?). It is also really hard to pick out one particular book in the cloud. However, it is eye-catching and provides a broad overview of the data at a glance.

McCandless’s word cloud definitely caught my eye, and I was curious to know how many of the books I had read. I printed out a copy and highlighted all the ones I had read. A couple of my coworkers saw me working on it and wanted to copy the exercise so we could compare our literary competence. I taped these up on our wall for public viewing. 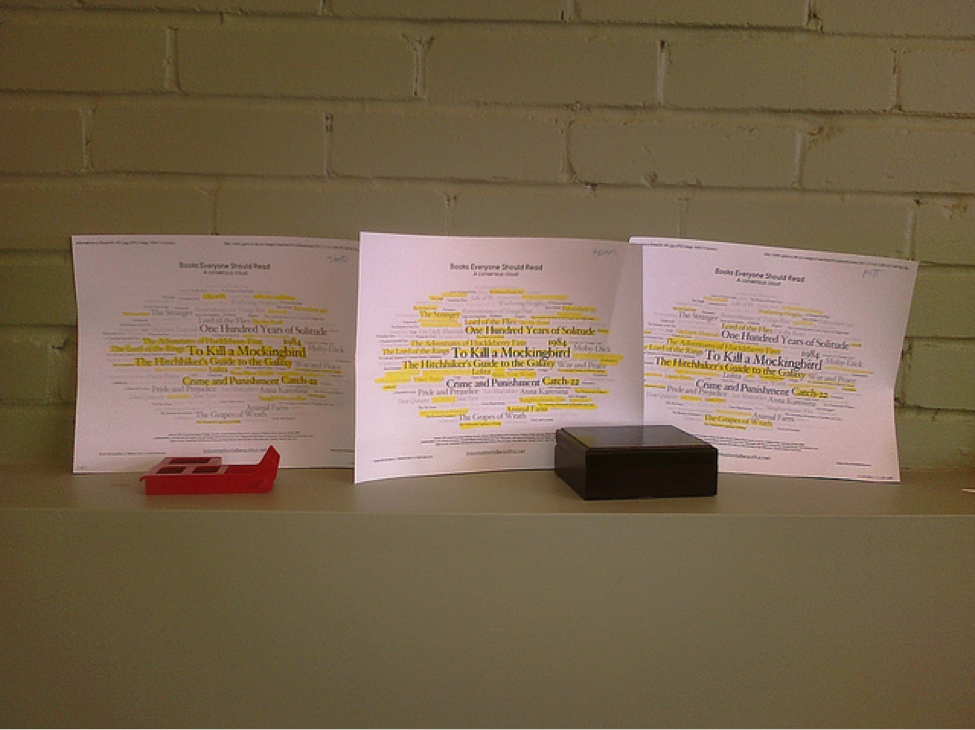 It became standard practice to ask all of the Earthlings to highlight their own clouds. Slowly my wall started to fill with word clouds, and I started posting photos to my Flickr account each time another cloud was added.

Eventually, one staff member remarked, “I would have a lot more highlighted if these were movies instead of books!” I took that as a challenge, and decided to create my own movie cloud! Following McCandless’s technique, I started by compiling as many lists of movies that I could find. I wanted it to be comprehensive, so I used 14 lists, ranging from Academy Award winners to Blockbuster Video’s 100 Most Loved Movies (the lists are on my dropbox account). After cleaning up the lists so they all used the same spellings for the movie names, I used http://wordle.net to generate a word cloud. 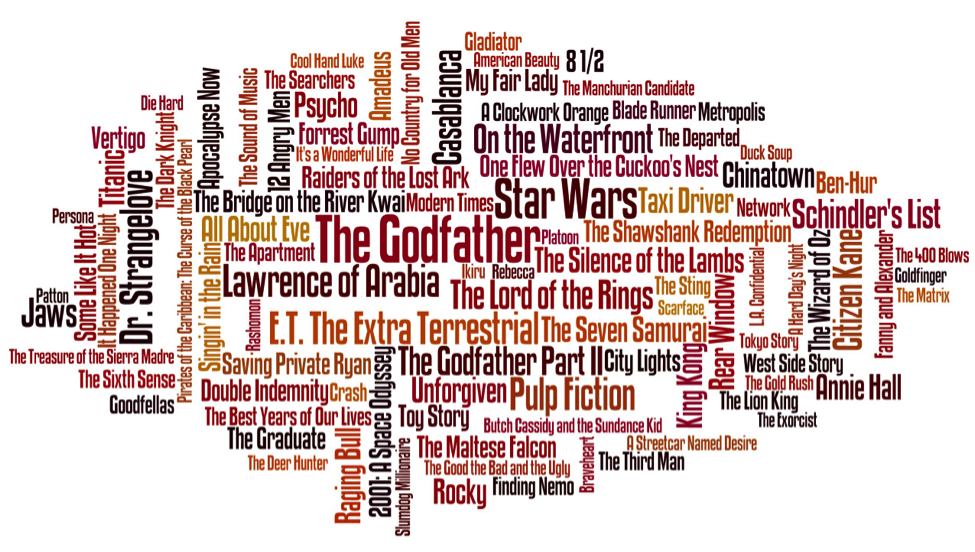 So now I started giving everyone in the office this word cloud to fill out as well and started taping them up on the opposite office wall (see Flickr album). As our company grew, I would ask each new employee to fill them out, and if people left I would leave theirs up. Now there are two large clouds of word clouds on my office walls. 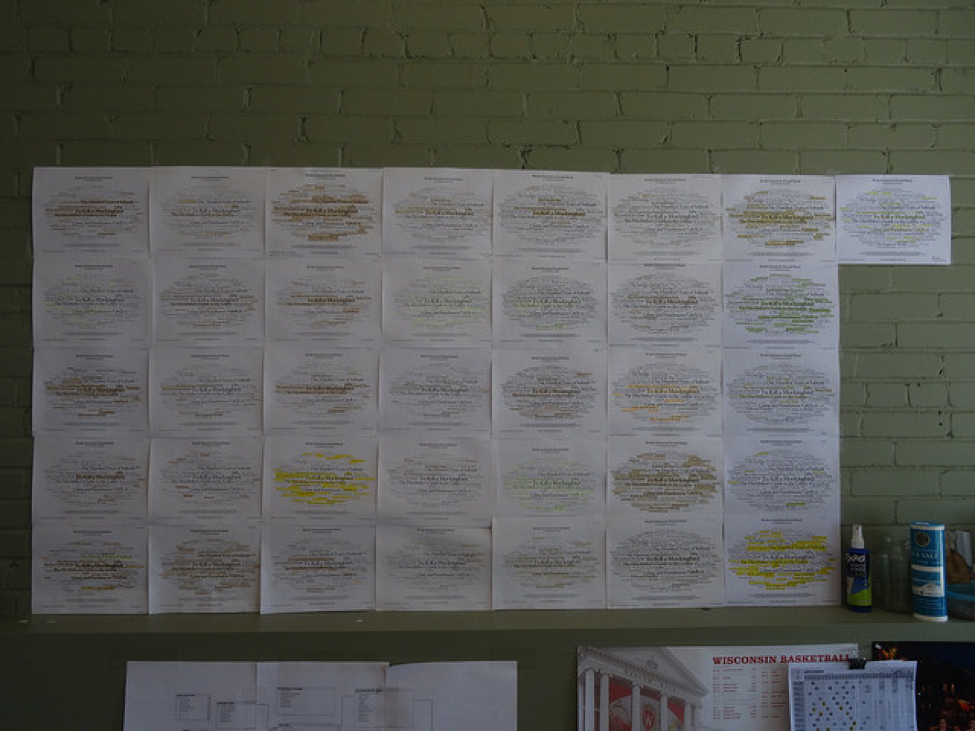 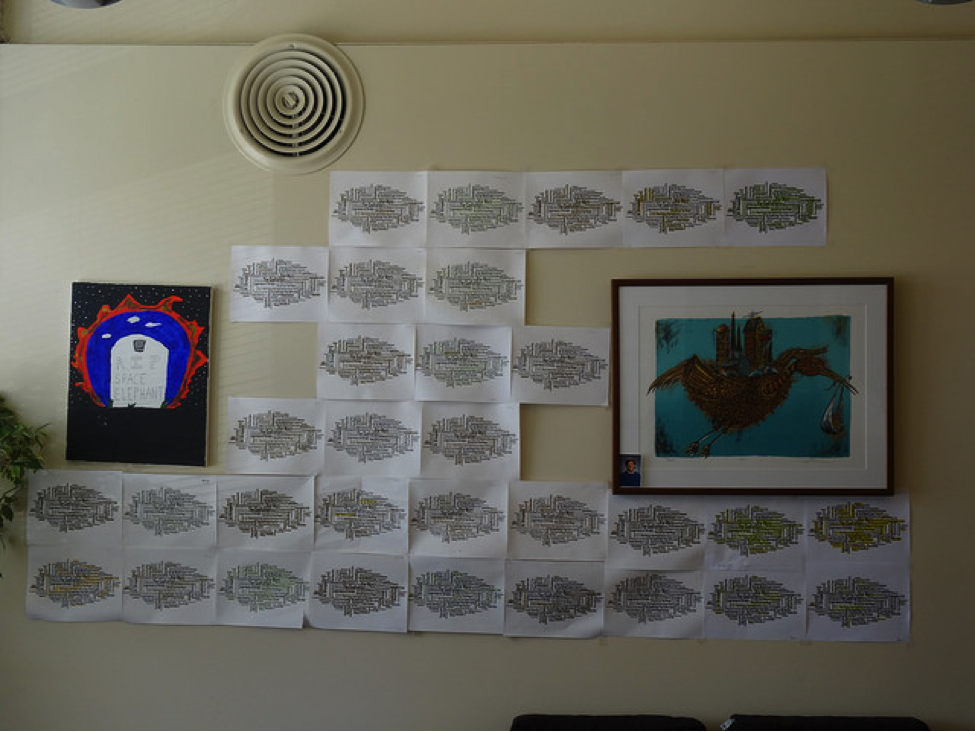 Now when people walk into my office there is often talk of the Word Clouds on the walls, which leads to much more lively discussions than “Cloud Computing” ever has. You can argue the virtues of Word Clouds as good data visualizations, but they for sure make good wall art and conversation pieces.