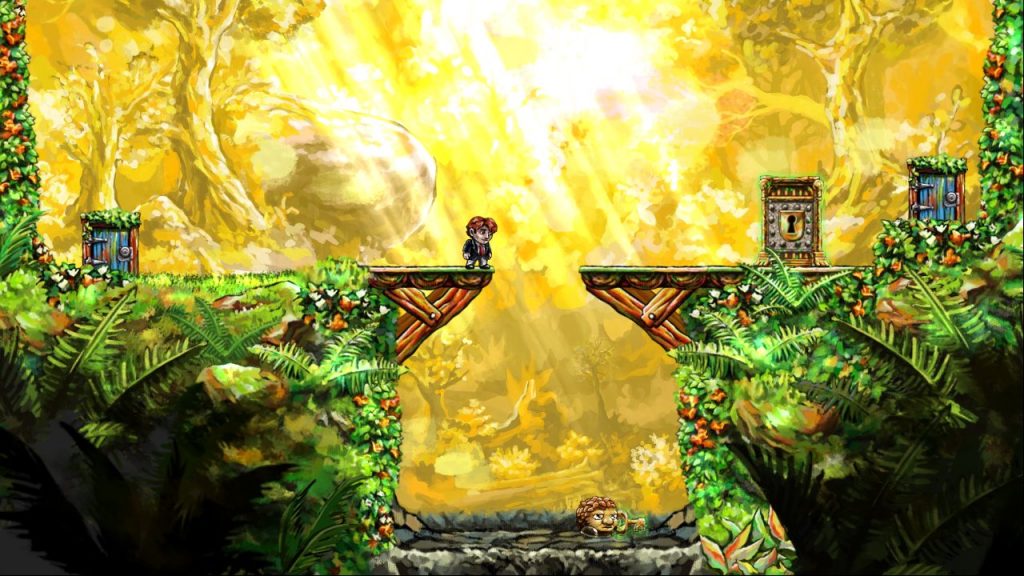 Earthlings love games; board games, video games, mind games (hey-oh!) Here’s a quick survey of some of the games we’re playing now. As you can see, when we’re off the clock we’re very busy saving the planet from disease, preparing for the apocalypse, contemplating metaphysical constructs and running away from the bad guys. (Pictured above: Braid)

Alexia S
Pandemic
Platform: board game/tabletop
Summary: A cooperative board game based on the premise that four diseases have broken out in the world, each threatening to wipe out a region. The game accommodates 2 to 4 players, each playing one of five possible specialists: dispatcher, medic, scientist, researcher, or operations expert. Through the combined effort of all the players, the goal is to discover all four cures before any of several game-losing conditions are reached.
Fun game but it has a bit of a learning curve. Since it’s cooperative, though, it’s easy to have more experienced players bring newbies up to speed during game play. One thing I don’t care for is that it is *markedly* easier with 4 players than with fewer because more roles are filled. It’s almost impossible to beat the game with just 2 players. Play time is about 1 hr. 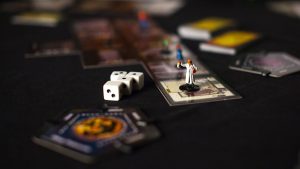 Amanda S
Betrayal at House on the Hill
Platform: Board Game/tabletop
Summary of game story: A two part game, Betrayal at House on the Hill starts with the premise that a group of people are at the House on the Hill and you spend the first half of the game exploring the house and discovering rooms in an attempt to understand why you’re in the house. You pick up items along the way and encounter events and omens. As the omens stack up a dice roll against the number of active omens on the table indicates when the second half of the game begins, where one member of the group becomes a traitor. The second half of the game is played through with the traitor accomplishing a varying goal defined by a rulebook while the remaining group members aim to accomplish a different goal and free themselves from the house. 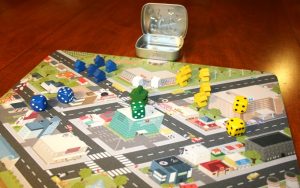 Bekee G
mint tin mini apocalypse (with manhole expansion)
platform: table top
summary: roll 7s to take turns strategizing how to get your team into the fallout shelter before the other guy – great for spending that awkward time at a restaurant between placing your order for food and getting said food 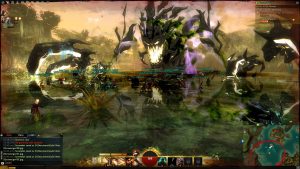 Dan G.
Guild wars 2
Platform: PC
Summary of game: MMORPG that has a lot of open world explore content, has sections for Player VS. Player. and larger World vs. World competitive play.

Pandemic: The Cure  (this is different than the one Alexia talked about)
Platform: Dice/board
Summary of game: As the last line of defense against the spread of Pandemics you rush around the globe collecting samples and treating as many people as possible while searching for a cure to 4 different diseases.

Don S
Braid
Platform: PC
Summary of game story: Clever time-manipulation dynamics throughout allow you to solve puzzles and “save the princess”.  A hackneyed game hook, but time and memory is tricky, and sometimes you must reflect on the past to understand your motives in the present. 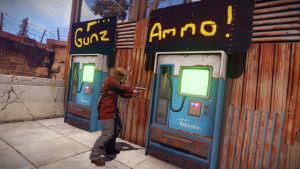 Eric A
Rust
Platform: Personal Computer
Summary: Apocalyptic-ish survival game. You wake up on a forested island and collect resources to build shelters and outlandish items. You can cooperate with those around you, or not. Similar to Minecraft, but with a graphics upgrade. Fun for hanging out online with friends in a low-stress game (as long as everyone is playing nicely). 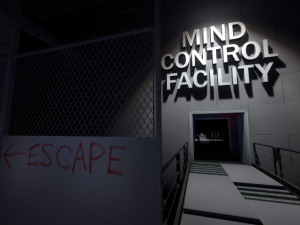 Jared C.
The Stanley Parable
Platform: PC
Summary of game story: There both is and isn’t a story. You play as Stanley, kind of. The “game” is hilarious, dark, meta, and thought provoking.

Mike K.
Fluxx
Platform: Card Game
Summary: The card game with ever changing rules! It starts out simple, with just the basic rule card: draw one card and play one card during each player’s turn. But New Rule cards quickly make things chaotic. Can you get the Rocket to the Moon before someone changes the goal to Death by Chocolate? 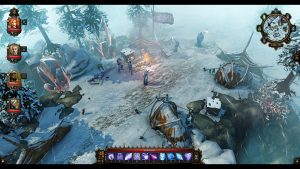 Steve B
Divinity Original Sin
Platform: PC
Summary: A turn-based fantasy RPG where your party is on a quest to stop the destruction of time itself. I had to upgrade my computer in order to be able to play it but now that I’m into it, I’m hooked.  Interesting storyline, fun characters, intuitive combat system, many different character class options.  Doesn’t take itself too seriously, which is nice in a game.