NLP and the CIA World Factbook 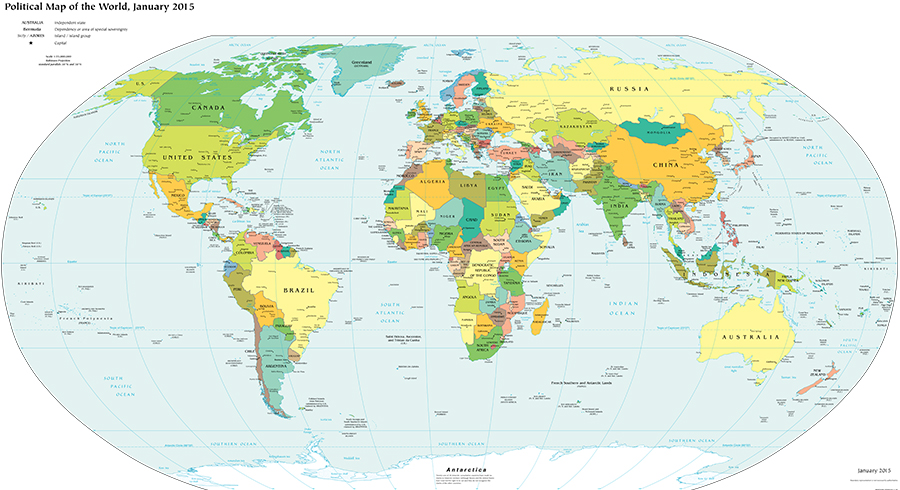 Each entry in the CIA World Factbook has a multitude of factoids as well as a continent (or sub-continent) name and description. It was the availability of a description that interested me, to use as the corpus in a Natural Language Processing NLP analysis to determine if, using only the description, a K-Means clustering algorithm would put the countries into their geographic region*.

There are 242 countries and territories covered by the CIA World Factbook. They are broken down into ten geographic regions (africa, australia-oceania, central-america-n-caribbean, central-asia, east-n-southeast-asia, europe, middle-east, north-america, south-america, south-asia). The countries are not evenly distributed by region, with africa having the most (55) and central-asia having the least (6).

Each country has a file in json format that was obtained from the Github repo. I wrote the script below in Python to parse the relevant fields from the json files and create a csv file for input to the NLP analysis.

The resulting csv file has four columns (countrycode,continent,countryname,description). In this case the continent is the region assigned to it by the CIA and not the classical definition of one of the six populated continents. I originally did the analysis in a Jupyter notebook, which is reproduced below as separate steps. For the sake of clarity I am printing out the full description and tokenized values from my father’s homeland, Ireland.

Number of rows in the countries.csv file is: 242. Normally this would be used to guide the initial number of clusters.

Here is the full description from Ireland:

Celtic tribes arrived on the island between 600 and 150 B.C. Invasions by Norsemen that began in the late 8th century were finally ended when King Brian BORU defeated the Danes in 1014. Norman invasions began in the 12th century and set off more than seven centuries of Anglo-Irish struggle marked by fierce rebellions and harsh repressions. The Irish famine of the mid-19th century saw the population of the island drop by one third through starvation and emigration. For more than a century after that the population of the island continued to fall only to begin growing again in the 1960s. Over the last 50 years, Ireland’s high birthrate has made it demographically one of the youngest populations in the EU. The modern Irish state traces its origins to the failed 1916 Easter Monday Uprising that touched off several years of guerrilla warfare resulting in independence from the UK in 1921 for 26 southern counties; six northern (Ulster) counties remained part of the UK. Unresolved issues in Northern Ireland erupted into years of violence known as the “Troubles” that began in the 1960s. The Government of Ireland was part of a process along with the UK and US Governments that helped broker what is known as The Good Friday Agreement in Northern Ireland in 1998. This initiated a new phase of cooperation between the Irish and British Governments. Ireland was neutral in World War II and continues its policy of military neutrality. Ireland joined the European Community in 1973 and the euro-zone currency union in 1999. The economic boom years of the Celtic Tiger (1995-2007) saw rapid economic growth, which came to an abrupt end in 2008 with the meltdown of the Irish banking system. Today the economy is recovering, fueled by large and growing foreign direct investment, especially from US multi-nationals.

And here are the tokenized (punctuation removed, lower-cased, and lemmaticized) words from this description:

Lengthy list! So, what can a quick scan of the cluster results tell us? There are some clusters with dominant regions (defined as having greater than 2/3 of the records): Cluster 0 (africa), Cluster 4,8,9 (europe), while the region with the greatest cohesion is middle-east, which only appears in three clusters (2,7,9). The cluster with the least amount of diversity, in terms of regions represented is Cluster 6, with only two regions (central-america-n-caribbean, australia-oceania). Clusters 1,4,5,6 are dominated by island countries/territories spread throughout the globe.
​
So, generally speaking, the country/territory descriptions did not lend themselves to the same geographic clustering that exists geographically on Earth. Possible enhancements to the analysis include:
a) remove duplicate entries from the tokens
b) keep the free-standing years in the tokens, but stem them to remove the last value, so decades would match (i.e. 1916 would become 191).
c) remove any token with a length if less than three.
d) remove the name of the country from its own token list.
e) alter the settings for the K-Means clustering algorithm. The TfidfVectorizer command has many other parameters beyond what I have used here. The “df” parameters I used relate to word document frequency and removes tokens that occur in fewer than 0.1 or greater than 0.9 of the documents.
f) remove the names of other countries from the token list. This I think is not a good idea because the history of certain countries is closely linked to other countries, and it would be important to preserve this. An example of this behavior is Cluster 1, which is made of almost entirely of France and countries/territories that were once or still are considered part of that country. It is by no means an exhaustive list of countries that have ties to France.