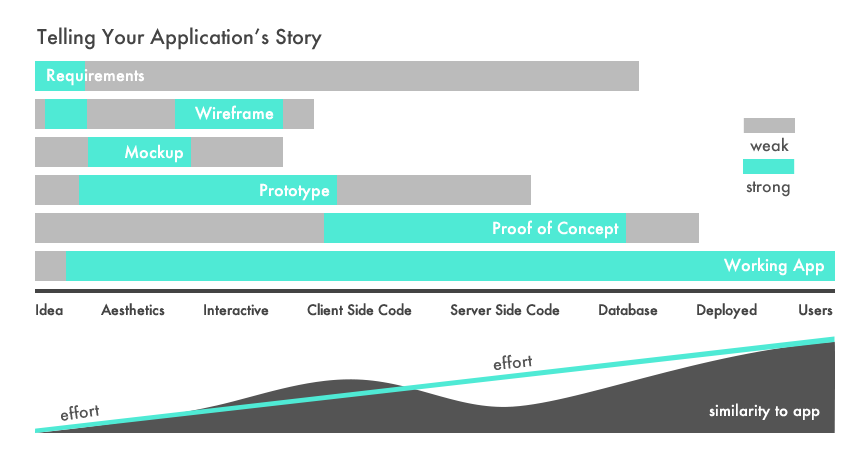 The precise definition of a prototype is often confusing to clients and even to other developers and designers. There are a lot of terms in this space and it’s not as obvious as it is in industrial design for example, where a “prototype” is clearly a 3d representation of the product, versus a 2d picture. In software, a prototype can also be described as a nonfunctional 3d representation except that the third dimension is time or interactivity. You can walk through a fully designed, albeit specific, use case or two in a complete prototype versus paging through a series of images that require narration to complete the story.

So How Does Earthling Prototype?
The main principle behind our process is the recognition that the most satisfying answer to any client is a working and validated app—a complete manifestation of their idea. Walking back from this, we strive to create a prototype that has a robust design, identity, and interactivity for at least the main workflow or two. It is more complete than either a mockup or wireframe and can still be executed rapidly. Our specific process is comprised mostly of static images that are broken into smaller parts and woven together to be interactive. Interactivity is usually accomplished with the final application’s native code such as HTML/CSS/JavaScript for a web app or ObjC/Java for mobile apps and executed as simply as possible with no or very minimal frameworks and no generic prototyping applications. Beyond native code simply performing better, at least on mobile apps, using raw native code is much more flexible and allows for a more creative, realistic exploration of what is possible.

What are the unique benefits of Prototyping?
– Prototypes are holistic, full representations of an application. Designers and clients rarely imagine a process in exactly the same way, so it’s important to minimize the amount of context needed in order to describe an application. This can be said of most any business situation and is one of the main reasons why wireframes and static mockups can fail.
– Prototypes allow you to focus and concretely walk through the major use cases for your application. This not only allows you to see the logical problems in your thinking, but it also opens the door to more meaningful user testing early in the game.
– Prototypes provide a powerful extension of your business pitch. A beautiful interactive presentation answers a thousand questions and can provide conceptual, visual grounding to the audience’s imagination when conversations around a business plan or domain become complex and difficult to explain concisely.

What a Prototype is Not.
As compelling as prototyping is for advancing a client’s idea, it is important to note what a prototype is not.
– A prototype isn’t a freestanding advertisement for an application. There will be a lot of holes or deadends in any prototype and this could be frustrating to users who don’t know what is or is not there. A good practice to avoid such confusion is to video record the product pitch with your prototype and share the recorded video.
– A prototype is not a comprehensively fleshed out specification. There are many questions that can be answered by a prototype and they give a running start to the specification process, but they cannot answer all or sometimes even enough questions to initiate the development of the application. You still need to outline specifics and be prepared to build more than one iteration of the prototype (or specific screens in the prototype) to understand development details.

We have found prototypes to be an irreplaceable tool in the application development process, and their value as an instrument for establishing a good collaborative relationship with our clients cannot be overstated.

If you have more questions about prototypes or would like to know more about Earthling Interactive’s prototyping process, Contact us!