When a pricey, off-the-shelf software became too rigid for rapid innovation, Liquid Freight turned to Earthling Interactive with a question: What if we could develop our own customized software? The answer was a proprietary software platform that not only saves Liquid Freight nearly six figures a year—it’s now become a revenue-generating SaaS product.

What do you do when off-the-shelf software keeps you from innovating?

Liquid Freight solves logistics challenges for the liquid food-grade community. Since their founding, the freight brokerage has put relationships first, not transactions. The approach has helped generate both continual growth and a loyal network of customers and carriers.

But that success has also demanded personalized support from a web consultant who can, in the words of Liquid Freight’s Jared Wallace, “breathe life into our crazy ideas.” The following is a case in point.

When you’re constantly pushing the boundaries for how to better serve your users, challenges are bound to come up. Liquid Freight had invested a lot in a well-known transportation management software (TMS) to power the web portal their carriers used.

Yet being tied to the TMS eventually started to hold the company back. Jared, who is Director of Business Systems & Technology, says it was making it difficult to do the following:

Pivot quickly with the direction of the freight market. Liquid Freight’s needs were simply too low on the TMS provider’s list of priorities.

The changes we wanted had to happen fast. Not take 18 months until beta testing.

Add functions that reflected their own unique workflow. Liquid Freight wanted to add more freight-specific functions to the TMS. “But after a few attempts, we realized we wanted the software to do things it was never really built to do,” says Jared.

Change without breaking the bank. Any TMS modifications that Liquid Freight wanted were going to be costly.

“But then we’d also need to make development changes on our own web platform. There was no way we were going to pay for custom development work on two different ends of the project,” explains Jared.

As the constraints of the TMS grew more apparent, Liquid Freight began to imagine all the things they could do better with a customized software platform of their own. “That’s when we turned to Earthling Interactive for a ‘Hey, we’ve got a crazy idea’ conversation,” says Jared.

According to Jared, the solutions that eventually emerged from that initial conversation were possible thanks to the following:

There are thousands of developers out there. But with how many of them are you just a number? You can’t solve a challenge like this one without the kind of personalized attention that Earthling provides.

Establishing the minimum viable path forward. Time was of the essence. Earthling helped Liquid Freight plan the most efficient path to severing ties with the TMS provider and operating with their own software.

“Within a month, we were on the road to development. And in less than six months, we were live with our own proprietary software,” says Jared.

Leveraging existing knowledge. Liquid Freight wanted to leverage all they’d learned from using the off-the-shelf TMS. But they also wanted to make a better software platform by having it rooted in their own workflow.

Jared says, “Earthling listened and worked really hard to understand where we’d been and where we wanted to go with our own software.”

Creating a seamless transition from one software to another. Liquid Freight’s carriers were accustomed to a user-friendly web portal.

“As we transitioned to our own software,” says Jared, “the carriers never lost functionality or had their experience interrupted, which was exactly what we wanted.”

Earthling Interactive led the process for making the customized platform commercially ready, working closely with Liquid Freight and a carrier who helped with beta testing.

Successful app development is more like an iterative circle than a straight line. Liquid Freight has really embraced that. They’re great to work with. They express their pain points in a helpful way. They trust the process. And they trust us.

Liquid Freight’s new software platform and SaaS product are still in their early stages, but the results are already more than encouraging:

Saving nearly six figures a year. Liquid Freight no longer needs to invest in an outside TMS, a huge cost savings. Even better, Jared says their proprietary software platform is paying for itself through increased efficiencies—and revenue (see below).

“It’s already generating revenue, and Earthling continues to make the product better and better. Meanwhile, we’re getting more confident with providing a saleable product like this. It’s exciting,” says Jared.

Continuing to adapt and thrive. Jared says the new software platform is a perfect example of what Earthling Interactive has been able to help Liquid Freight do over their 10-year partnership: adapt.

Their support helps us adapt to change when change is needed. I can’t emphasize enough how important that’s been for our company’s success.

Find out how Earthling Interactive can help with your custom web applications needs. Set up an introductory call to discuss your challenges. 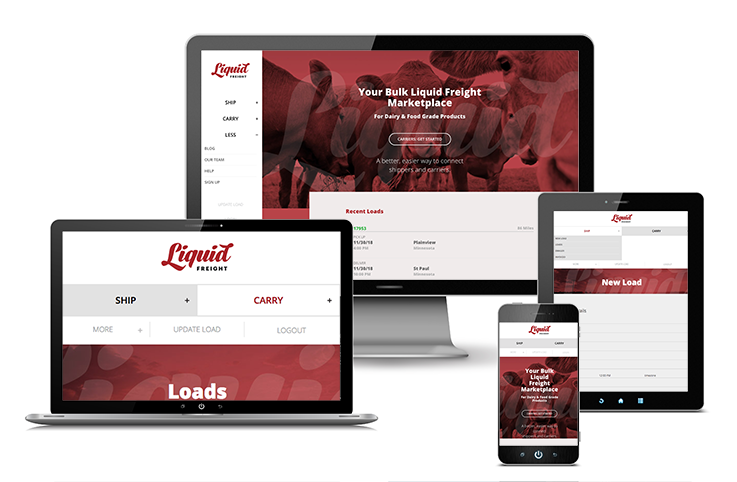